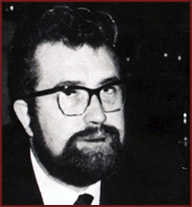 The one person often overlooked in this case is the victim – Angus Stuart Sibbet.
While Michael’s campaign continues it should never be forgotten that an innocent man lost his life that night in 1967 and left behind many people who still mourn his passing.

Angus was just 33 when he was killed.
Although he was from the North East of England it was in London he first met the Luvaglio brothers. They all soon became firm friends and it wasn’t long before Angus was working for the company.

When Angus’ father became ill back in Newcastle towards the end of the 1950’s he took Vince Landa (Michael’s brother) up there to visit him. After the visit they called into Dunston Working Men’s Club and Vince realised he’d stumbled upon an untapped market, ripe for putting his gaming machines, pinballs and jukeboxes into.
In a matter of weeks Michael, Vince and Angus relocated to
Tyneside and soon after ‘Social Club Services’ was born.

Angus liked the finer things in life and it was no secret that he
enjoyed the company of women and frequented many of
Newcastle’s nightspots. He had his own table at La Dolce Vita, where he regularly came for dinner with friends.
And it was here that he was last seen alive, as he left to meet Michael Luvaglio at The Birdcage Club a short distance away.

At the time of his death Angus was a partner in SCS and the
company was about to be floated on the stock exchange.
Valued at £8million it would have made them all very wealthy men.