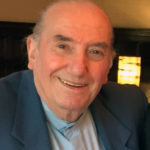 Supporters, friends and followers. I’m so sad to tell you that Michael Luvaglio passed away late yesterday.
He was a force of nature, who overcame one of the worst things to happen to a man when he was convicted of a murder he did not commit. Where most of us would’ve crumbled Michael did not and threw himself into charity work after his release, making a difference to hundreds of people’s lives.
Even when his own health deteriorated he was only concerned for others.
But he never lost the hunger to overturn his conviction and although we tried so hard I’m utterly devastated we were unable to clear his name while he was alive. He deserved that. But I made him a promise that I would continue and that is what I will do. He was a lovely man and I will miss him.
Neil Jackson
RIP Michael Luvaglio, 4th June 1937 – 19th November 2020